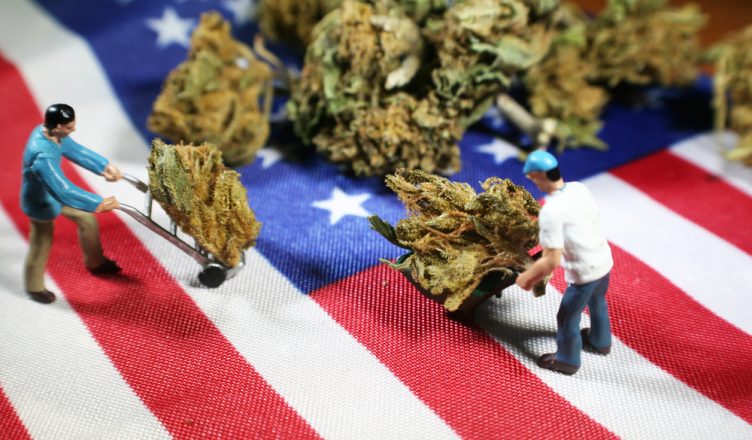 The US has seen cannabis gradually being legalized or decriminalized. In 1996, California was the only state to make cannabis legal for medical use—currently, that list has grown to include Alaska, California, Colorado, Maine, Massachusetts, Nevada, Oregon, and Washington.

Although Washington D.C. completely legalized the recreational and medical use of cannabis, the commercial sale of the drug is currently being blocked by the US Congress.

If you’re thinking about getting into the cannabis transportation business, it’s important to note state laws pertaining to its regulation. The following is a quick overview of cannabis legalization in several US states.

Familiarize yourself with your rights before starting your cannabis delivery operation, and remember that a route planner can help you make the whole process hassle-free.

The Difference between Cannabis Legalization and Decriminalization

There is a clear distinction between cannabis legalization and cannabis decriminalization.

Legalization means those who follow the law as it pertains to cannabis will not be ticketed, arrested or convicted for using it. For instance, after cannabis was legalized in Colorado in 2012, individuals had the right to use it legally as long as they complied with the rules and regulations of its use.

Decriminalization occurs when a state repeals or at least amends its laws; certain acts remain criminalized, but individuals are not subject to prosecution.

In California, there is a decriminalization statute if someone is found to possess limited amounts of cannabis. Based on California law, if a person has a small amount of cannabis, the most severe punishment they’ll receive is an infraction followed by a fine. He or she won’t be faced with any criminal consequences like jail time or prosecution.

If you’re thinking of starting a cannabis production or transportation business, you’ll need to be familiar with your state’s laws pertaining to cannabis. Obviously, when cannabis possession is illegal in a state, transporting cannabis in that state is also illegal.

In states where cannabis is legal, businesses are usually allowed to transport more cannabis at a time than individuals.

In Colorado, for example, an individual who transports an ounce or less of cannabis will not face any penalty if they are at least 21 years of age and are not being compensated for its transportation.

It’s a different case for businesses. States that have legalized cannabis require a license from businesses before allowing them to transport the drug legally.

In the state of Washington, transporting cannabis requires an individual to be licensed as a cannabis retailer. Moreover, the individual must follow specific transportation guidelines that regulate such factors as the amount of cannabis being delivered.

If you’re using a smart technology solution such as a route planner, this shouldn’t be a problem. A road trip planner gives you the ability to set the amount of cannabis you need to transport within the state for every route.

A driving route planner gives you the ability to set additional constraints such as maximum distance per vehicle, stops per route, route duration, turn restrictions and more. You can even use the fleet management software to input the maximum amount of cannabis each vehicle is capable of carrying. The best part: a scheduling app takes only 30 seconds to plan a well-optimized route factoring in all your customized constraints.

A trip planner comes equipped with a GPS tracking feature that helps you track your vehicles and drivers on the road in real-time. This gives you full control over your field operations so you can reduce the risk of a road incident.

For example, if you see that a driver is deviating from their route or showing signs of road rage, you’ll know about it immediately. You can give them a call and tell them to cut it out right away. A GPS tracker is also a great tool to protect your cargo from theft.

The best route planners even come with a two-way, real-time chat feature that offers instant communication with your driver.

Long story short: because requirements vary from one state to another, it’s important for your business that you check with your particular state’s licensing prior to transporting cannabis.

Although cannabis has been legalized in many US states, it currently remains illegal under US federal law. This means that transporting cannabis across state lines can lead to criminal prosecution under federal law.

The US Drug Enforcement Agency offers a chart that shows the penalties involved in cannabis trafficking. You can download it here. The penalty differs depending on the amount of cannabis transported and whether it’s the individual’s 1st or 2nd offense.

Given the fact that you’ll be breaking the law if you’re caught transporting cannabis across state lines, it’s important to use a route planner in order to keep your drivers away from illegal routes within your state.

A route planner comes with an avoidance zones feature that allows you to indicate the routes or areas your drivers should avoid. The software will apply your settings during route optimization in order to design routes accordingly.

In technical terms, based on the US Constitution’s Supremacy Clause, the federal government can prosecute a person working in the cannabis industry even if the operation is legal under their state laws.

However, under the administration of former US President Barack Obama, it was declared that the federal government will not challenge state laws that legalize cannabis so long as states have strict regulations in place for distributing and selling it.

Moreover, the Deputy Attorney General has put out a memorandum detailing cannabis enforcement priorities. It does not include the prosecution of legal retailers that comply with state laws.

So, if you are currently in the cannabis transportation industry or would like to join it, keep in mind the enforcement priorities of the US federal government so you can avoid the risk of prosecution.

Do you think state and federal laws are clear enough to allow for a law-abiding cannabis transportation business? Do you have any questions? Please feel free to leave your comments below.

Also, here are three quick questions to recap the important things to note when starting a cannabis transportation business:

Does Your Free Route Planner Offer These Critical Features?

Good Is Not Good Enough: Here’s Why You Should Only Use the Best Route Planners